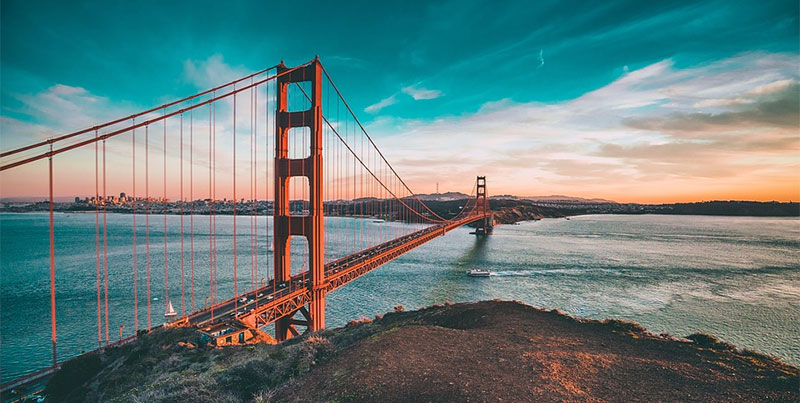 California is such a big and diverse state that it has just about everything for a person seeking a great vacation. From classic gourmet dining in San Francisco to the great outdoors in Yosemite and Sequoia  National Parks, the question is not whether to go but where to go.

1. Los Angeles – The second largest city in America is the home to America’s film and television industries. Studios such as Warner Brothers, Paramount, and Universal (which also has a great theme park) offer behind the scenes tours. Venice Beach is an iconic place where you can find outdoor vendors and performers of all varieties. Nearby Disneyland in Anaheim is a must-visit place for families or even adults wanting to rediscover their inner child. The Hollywood Walk of Fame, the Los Angeles Museum of Art, and the La Brea Tar Pits are also attractions that are worth a look.

2. San Francisco – The iconic city in Northern California is the home to the Golden Gate Bridge and Fisherman’s Wharf. A ride on the cable cars is an experience that cannot be had in any other city in the world. Take a ferry to Alcatraz Island, and take a tour of the notorious prison. The San Francisco Maritime National Historical Park is the home to a number of historic ships. The Japanese Tea Garden, the San Francisco Botanical Gardens, and the Conservatory of Flowers are all located in Golden Gate Park. San Francisco, due to its rich, diverse immigrant community, is the home of a vast number of great ethnic eateries.

3. San Diego – The city, located on the southern California coast, has a number of undiscovered attractions. Balboa Park is filled with natural greenery, shady trees, walkways, gardens, museums, and theaters. The park is home to the world-famous San Diego Zoo, which houses more than 3,700 animals of 650 species and subspecies. The Gaslamp Quarter is an historical area of more than 16 blocks filled with restaurants, boutiques, and entertainment venues. The Sea Port Village is another dining and shopping destination by the bay. The nearby USS Midway Museum displays the retired United States Navy aircraft carrier, its planes, and its history.

4. Napa Valley – A tour of Napa Valley, California’s wine country, is a must for anyone who has courted the grape. You can take a wine tasting tour, or you can get in the car and do a little exploring. Many distilleries in Napa Valley not only offer wine tasting but tours of their facilities where they explain the wine-making process. The region also provides excellent dining, cultural venues, and some of the most beautiful landscapes in the world.

5. Yosemite National Park – Yosemite National Park has just about every kind of natural wonder that can be found in eastern California, including waterfalls, granite cliffs, mountain ranges, streams, groves of giant sequoias, lakes, and glaciers. Yosemite has been noted for its rich biological diversity. While a lot of people drive through the park, bus tours are available for people who don’t want to put up with the lack of parking and congestion that occurs during the summer season. Visitors can also go on multi-day backpacking tours, do rock climbing, and white-water rafting among other activities.

6. Sequoia National Park – This national park, as the name suggests, is the home to giant sequoia trees, among which is the General Sherman, designated as the largest tree in the world. Much of the park is roadless wilderness, accessible only by foot or horseback. Therefore, the park is a favorite for hiking, backpacking, fishing, and camping. Attractions include the Tunnel Log, the Crescent Meadow made famous by John Muir, and Moro Rock, from where much of the park can be viewed. The Giant Forest Museum relates the history of the Sequoias and the history of the park.

7. Palm Springs – The desert resort town is the home of numerous golf courses, spas, and cultural venues. The city contains a large number of boutiques and eateries. Palm Springs is also a great jumping-off point for day trips to the nearby desert and canyons. The San Andreas Fault, which runs along much of the length of California, can be visited at a Palm Oasis where water seeps out from beneath the earth. Many tours include interpretive guides to bring to life the vibrant ecosystem.

This site uses Akismet to reduce spam. Learn how your comment data is processed.